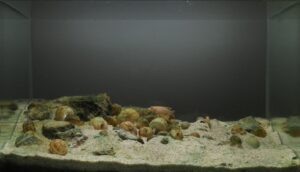 List of plants: No plants; there is some algae.

Description of Decorations and Substrate: An aquarium representing the Magomba shores of Lake Tanganyika. The bottom is fine sand, some rock, and empty snail shells. Empty shells and sandy areas were chosen similar to those in the habitat.

The catchment area of the lake is 231,000 km2 (89,000 sq mi). Two main rivers flow into the lake, as well as numerous smaller rivers and streams (whose lengths are limited by the steep mountains around the lake). The one major outflow is the Lukuga River, which empties into the Congo River drainage. Precipitation and evaporation play a greater role than the rivers. At least 90% of the water influx is from rain falling on the lake’s surface and at least 90% of the water loss is from direct evaporation.

The major river flowing into the lake is the Ruzizi River, formed about 10,000 years ago, which enters the north of the lake from Lake Kivu.The Malagarasi River, which is Tanzania’s second largest river, enters the east side of Lake Tanganyika.[10] The Malagarasi is older than Lake Tanganyika, and before the lake was formed, it probably was a headwater of the Lualaba River, the main Congo River headstream.

The lake has a complex history of changing flow patterns, due to its high altitude, great depth, slow rate of refill, and mountainous location in a turbulently volcanic area that has undergone climate changes. Apparently, it has rarely in the past had an outflow to the sea. It has been described as “practically endorheic” for this reason. The lake’s connection to the sea is dependent on a high water level allowing water to overflow out of the lake through the Lukuga River into the Congo.[10] When not overflowing, the lake’s exit into the Lukuga River typically is blocked by sand bars and masses of weed, and instead this river depends on its own tributaries, especially the Niemba River, to maintain a flow.

Due to the lake’s tropical location, it has a high rate of evaporation. Thus, it depends on a high inflow through the Ruzizi out of Lake Kivu to keep the lake high enough to overflow. This outflow is apparently not more than 12,000 years old, and resulted from lava flows blocking and diverting the Kivu basin’s previous outflow into Lake Edward and then the Nile system, and diverting it to Lake Tanganyika. Signs of ancient shorelines indicate that at times, Tanganyika may have been up to 300 m (980 ft) lower than its present surface level, with no outlet to the sea. Even its current outlet is intermittent, thus may not have been operating when first visited by Western explorers in 1858.

The lake may also have at times had different inflows and outflows; inward flows from a higher Lake Rukwa, access to Lake Malawi and an exit route to the Nile have all been proposed to have existed at some point in the lake’s history.

Lake Tanganyika is an ancient lake. Its three basins, which in periods with much lower water levels were separate lakes, are of different ages. The central began to form 9–12 million years ago (Mya), the northern 7–8 Mya and the southern 2–4 Mya.

Description of the Underwater Landscape of the Biotope: This aquarium was made to represent the coastline of the town of Magombo, Tanzania. The habitat of Lamprologus ocellatus, one of the shell dwellers, was discussed. It simulates a sandy and slightly sedimented area.

List of Plants Found in the Nature Biotope: There are no plants in this biotope.

Threats to the Ecology of the Biotope: The pollution from excessive sediment and nutrient loads caused by erosion in the watershed, industrial and urban waste,
The intensive fishing using inappropriate methods, and
The human activities (constructions, agriculture, etc.) in the littoral zone of the lake that destroy the buffer zones which also serve as fish spawning areas.