Lake Vembanad near the confluence of the Pamba River, Kerala, India 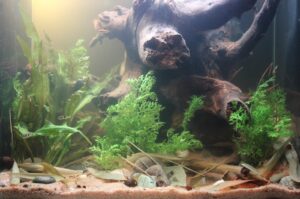 Description of Decorations and Substrate: Indian mango root (Mangifera indica), which is common on the coasts of rivers and lakes in India. Its roots and branches often create shelters for various inhabitants in the coastal zone of shallow water. At the bottom you can see the leaves and stems of bamboo (Bambusoideae), which is not only found on the shores of Lake Vembanad, but is also actively used as a construction of dams.

Description of the Area Surrounding the Biotope:

Vembanad, also known as Punnamada, is the longest lake in India and also the largest lake in Kerala. With an area of ​​2,033 square kilometers and a maximum length of 96.5 km, it is the second largest Ramsar Site in India after the Sunderbans in West Bengal.
The lake borders Alappuzha, Kottayam and Ernakulam districts. It lies at sea level and is separated from the Laccadive Sea by a narrow barrier island. Channels link the lake to other coastal lakes to the north and south. The lake surrounds the islands of Patiramanal, Perumbalam and Pallippuram. Lake Vembanad is about 14 kilometers wide at its widest point.
The lake is fed by 10 rivers that flow into it, including six major rivers of central Kerala, namely Achenkovil, Manimala, Minachil River, Muvattupuja River, Pamba and Periyar. The total area drained by the lake is 15,770 km², [5] which is 40 % area of ​​Kerala.
In connection with the boat racing in this lake, high levels of pollution were noted at some points in the backwaters of Vembanad. The Government of India has designated the Vembanad Wetlands under the National Wetland Conservation Program.
On the shores of Lake Vembanad, there is Cochin, beloved by many travelers, the Kumarkom bird sanctuary, the famous rice granary of Kerala – Kuttanad.
The construction of Tannermukkom removed salinity from the fertile soils in the Kuttanad region, and allowed additional crops to be harvested during the dry season: instead of the traditional two, Kuttadadam farmers harvest three crops a year, which is why the Kuttanad region is otherwise called the “Rice Bowl of Kerala”.
Glowing and washed even in the dry season, lush greenery, the satiny surface of the water, which was adorned even by weeds spreading like fire, heavy branches with mango fruits leaning right to the water itself, grandiose ancient trees overgrown with flowers of the coast and the amazing aesthetics of coastal village life – all this describes Lake Vembanad.

Description of the Underwater Landscape of the Biotope: Dwarf tetradons prefer shallow rivers. Where the current is quieter, and there is more food. As a rule, these are backwaters where mollusks are concentrated in various dams of underwater gardens.

Threats to the Ecology of the Biotope: Carinotetraodon travancoricus – the central species of the ichthyofauna presented in this biotope aquarium. It is endemic to the Indian Pamba River and Lake Vembanat. And, in connection with the interest in this fish as an aquarium inhabitant, its active catch can lead to a decrease in the population in the natural environment. In addition, the threat to the existence of Carinotetraodon travancoricus is an environmental threat that is common in relation to all reservoirs in India. In particular, a large amount of waste is dumped into Lake Vembanat, including from houseboats, causing irreparable damage to the flora and fauna of the reservoir. A huge number of boats with tourists and fishermen, which has long exceeded the capacity of the lake. This once again shows human irresponsibility when using natural resources.
The lake is facing a major environmental crisis and has been reduced to 37 percent of its original area as a result of land reclamation.
Uncontrolled mining of shells from the bottom of the lake also poses a threat to the ecosystem. Wastewater and a large amount of organic material emitted from neighboring areas, including the medical college in Alappuzha, enter the water and are responsible for reducing the dissolved oxygen content in the water of the reservoir.
Fortunately, the government of Kerala is taking a number of innovative measures to protect and conserve the Vembanad wetlands, in particular by creating bamboo shelters for fish. A unique feature of the lake is the 1,252 meters (4,108 ft) long Tannermukkom Salt Water Barrier, which is built as part of the Kuttanada Development Scheme to prevent tides and salt water intrusion into the Kuttanada lowlands. The main drawback of the design was the loss of the ability for fish and shrimp to migrate upstream, as well as the increased growth of upstream weeds (water hyacinth). Water hyacinth is a free-floating plant (hydrophyte). Unfortunately for Lake Vembanad, this is one of the fastest growing plants, with each shoot producing thousands of seeds each year that can remain viable for over 28 years! When the situation gets out of hand, water hyacinth covers the waters completely, and a beautiful flowering green carpet blocks the sunlight from reaching deep-sea aquatic plants. This, in turn, leads to a decrease in the level of oxygen in the water, and, as a result, the death of fish and turtles. It creates room for mosquitoes, snails and parasitic worms that cause schistosomiasis. Knowing this, you begin to look with completely different eyes at the opening pictures of the blooming lake Vembanad…
We are actively promoting Carinotetraodon travancoricus with the aim of spreading it more widely in home aquaria. It is to achieve this goal that the creation of a biotope aquarium of the Vembanad Lake site serves, which shows all the beauty of Carinotetraodon travancoricus in its natural habitat and supports its population at least at home!