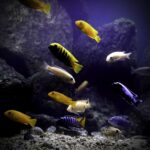 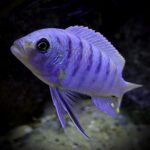 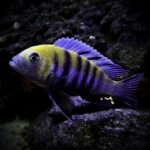 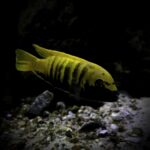 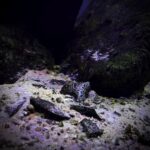 List of plants: Planting in the true sense of the word was not done here in this aquarium, since these plants would love to be uprooted after a certain time anyway, so unnecessary rubbish would have arisen in the tank, I wanted to prevent this problem. In addition, in Malawi Lake Allah there is usually only one fox on stones and little plant growth.

Description of Decorations and Substrate: The stones are reproduced from a mineral mass so that algae growth can form on the surfaces.
Furthermore, the stones are arranged in transverse separation so that the territories of the fish can be clearly separated.
The fish stock is also chosen so that the territories correspond to the number of separate areas in the aquarium. Thus, the decoration matches the selected trimmings. And at the same time show a similarity to the natural habitat.
Furthermore, the stones can be back-swimmed and their arrangement therefore ensures peace, at the same time for an even distribution of the aggression of the fish in the aquarium.
The rocks are designed and produced to match the top and bottom image as a background of Mumbo Island, Lake Malawi.

The substrate is a self-mixed substrate. It corresponds to the naturally occurring substrate in Lake Malawi in a mixture of sand with a grain size of 0.4-0.8 mm and also mixed small pebbles. See detail photo.

Description of Equipment: The aquarium water is filtered using a specially designed cassette filter with various fine-pored and coarse-pored sponges of ppi 10 and ppi 20 as well as biological filtration using large bio-balls.
A Jebao DCP 2500 pump is installed in the filter, which ensures enough water surface movement and in the event of a power failure, an air lifter with a membrane pump that runs at regular intervals during the day is installed. This keeps the bacterial cultures alive in the filter and thus prevents the dying of nitrosomonas and denitrifiers in the event of an emergency power failure.

A 250W heater is installed in the cassette filter for optimum water temperature. If the desired temperature is exceeded, 2 x 12 V fans cool the water.
There is a temperature monitoring system built in to ensure constant temperatures in the aquarium.

A complete day simulation is running with sunrise and sunset including bad weather, clouds etc.
A daily routine through different zones left, middle, right, front and back is also available.

Additional Info: The aquarium water is changed at 70% in a 7-day interval.

Only 40 ml EASY-LIFE PROFITO is added to the aquarium water to promote good algae growth and thus natural food supply as well as natural growth of the stones.

The water is taken from the pool by a pump system with approx. 13-15 watts and returned to the desired upper water level by a Gardena system with level control.
This avoids overflowing.

Description of the Area Surrounding the Biotope: Lake Malawi is the ninth largest lake in the world. With a length of 600 km, it is around nine times longer than Lake Constance. Lake Malawi is one of the 3 Rift Lakes meaning it is located in the Great Rift Valley of Africa.

The coastal relief varies from rocky cliffs to extensive beaches.

The structure and slope of the eastern shores of the lake are distinctly different from those of the western and southern shores.

The east coasts are generally much steeper and tend to carry much clearer water than other places.

On the northern coast of Tanzania between Ikombe and Lupingu you can regularly expect underwater visibility of over 20 m.

However, the greatest biodiversity is found around the islands of Likoma and Mbenji and in the southern part of the lake around Cape Maclear.

The most isolated spots in the lake (where cichlids occur) are Taiwan Reef and the island of Chinyankwazi and Chinyamwezi.

Description of the Underwater Landscape of the Biotope: The average water surface temperature in the lake is between 23 and 28 °C. Seasonal changes in temperature and precipitation directly affect the transparency of the water: if on a hot February day visibility can be almost zero, on a calm October day it can be more than 20 m. In biotopes with a rocky subsoil, the water is more transparent than in areas with a silty subsoil. This biotope is an aquatic transitional landscape with both rocks and areas of sandy or silty soil at a sufficient depth.

List of Fishes and Invertebrates Occurring in the Nature Biotope: See various sources e.g. Cichlidae.Com , or information websites like Malawi-Germany or Malawi.si .
There are over 900 species, it would probably be too much to list them here.

Threats to the Ecology of the Biotope: Aquatic plants are suffocating all life in Africa’s third-largest body of water n East Africa is on the verge of a natural disaster. Life in large parts of the huge Lake Malawi threatens to suffocate due to lack of oxygen. The cause is a plant, the water hyacinth (Eichhornia crassipes). Around 500 species of fish, most of them endemic, are already severely endangered.
With an area of ​​30,800 square kilometers, Lake Malawi is about the size of Belgium and the third largest freshwater lake in Africa. The body of water, 550 kilometers long and up to 80 kilometers wide, lies between the steep walls of the Nyasa Rift Valley, part of the East African rift system. The lake is up to 700 meters deep.
Water hyacinth, related to lilies, was introduced into the lake at some point. Due to its strong vegetative propagation, it has become a dreaded weed. The plant floating on the water blocks the sunlight and thus prevents the growth of plankton, an important food source for the fish. Among other things, Lake Malawi is home to the cichlids, popular aquarium fish, which have developed their greatest biodiversity here. Catfish, eels and Nile pike are also endangered. The water hyacinth also absorbs huge amounts of nitrogen and phosphorus. The decaying plant masses reduce the level of oxygen in the water and damage all life forms in Lake Malawi.

Fishing, the main source of income for those living near the lake, is hardly possible anymore, especially in the shallow south of the lake. This is where the greatest diversity of fish species can be found, and this is also where the most important spawning grounds are located. In this region, the carpet of water hyacinths is already so dense that boats have difficulty navigating through. In addition, the lake is beginning to silt up, especially in its ecologically most important parts. The vast amounts of vegetation to its south slows the current, which drains water into the Shire River, which empties into the Zambezi.
The Malawi government is attempting to use natural means to combat waterborne plague. Their weapon is the so-called water hyacinth beetle. He comes from South Africa and is now bred at the lake. The insects eat the leaves of the hyacinth. Their larvae feed on the flowers. Patrick Maseko Phiri, head of the Beetle program: “This is currently the only method that promises some success. But it’s a slow process.” The population was asked to collect and burn as much of the water hyacinth as possible. Attempts to control the plague with chemical weapons have failed in two ways. They proved to be ineffective and too expensive.
The consequences of plants or animals invading an ecosystem that is new to them can be seen a few hundred kilometers north of Lake Malawi: in the 1950s, British colonial officials released the giant Nile perch into Lake Victoria. At that time there were only numerous cichlid fish in the largest tropical lake on earth
species, but no large predatory fish. The Nile perch, which can weigh up to a hundred kilograms, attacked their little relatives. Since they did not find any natural enemies there themselves, the Nile perch multiplied explosively.