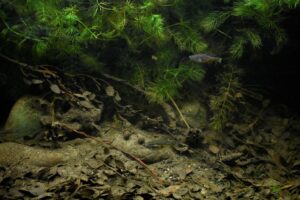 Description of Decorations and Substrate: According to information about creating a correct representation of skiffia francesae biotpe habitat the species may prefer a habitat with none to moderate current, structured with gravel, rocks, roots, branches, fallen leaves and submerse or/and river bank vegetation
aquarium is decorated based on the following information with materials collected frm local river banks and leaves collected from trees existing in the natural habitat

Water Parameters: Temperature varies from peaks of 24-25c highest to 19-20 lowest in a cycle,mimicing the natural habitat

Additional Info: Water changes are done every 7 days and diet is based on frozen foods and freezedried insects

Description of the Area Surrounding the Biotope: Laguna de Sayula (“Sayula Lake”) is a lake located in the southern area of Jalisco, about 60 km from Guadalajara. It is located in the municipalities of Sayula, Zacoalco de Torres, Amacueca, Teocuitatlán de Corona, Atoyac and Techaluta de Montenegro.
The lake level has gradually been lowering since 1993 but it still supports a large variety of wildlife
Laguna de Sayula is a wetland with Ramsar (an important place for bird conservation), the wetlands are ecosystems where water is the main factor controlling the environment, vegetable life and animals associated with it. The lakes of the closed Sayula-Atotonilco basin form part of the endorheic lakes of the neo-volcanic axis. But Laguna de Sayula is especially important because of its relation to the migratory habitats of the North American birds.
The described biotpe in this location refers on a Species of fish named Skiffia Francesae.
(coordinates given 19.94630250631652, -103.60942070549211)
* The following presentation,refers on the period tha Skiffia Francesae existed in their natural habitat. Skiffia francesae is not existing in Laguna dE SAyula anymore (see Threats for the ecology ) *

The Golden Skiffia is endemic to the Mexican federal state of Jalisco. It was historically only known from the Río Teuchitlán in the Río Ameca headwaters and from the Río Ameca itself about 12km E of the town of Ameca. Individuals collected in 2007 from the El Molino pond in the endorheic Laguna de Sayula basin also belong to this species, and those from the Presa La Ciénaga (Presa Buenavista), upper Río Ameca drainage, should be Golden Skiffia as well due to the drainage (determined as Skiffia multipunctata in 1963, so before Skiffia francesae was described)
However, this species disappeared from all of these habitats and only persists in aquariums. Two subpopulations are recognized: The Upper Río Ameca subpopulation (type subpopulation) and the Laguna de Sayula subpopulation. Both are regarded Extinct in the Wild

Description of the Underwater Landscape of the Biotope: The former habitat in was a quiet, thermal and clear to murky water with only a slight current. Substrate was deep mud with a few rocks, silt and sand. Few species of aquatic plants were only present, such as Ceratophyllum ,Lemna sp, Potamogeton etc

Threats to the Ecology of the Biotope: As already mention Skiffia francesae are extinct from their natural habitat
[…] Two subpopulations are recognized: The Upper Río Ameca subpopulation (type subpopulation) and the Laguna de Sayula subpopulation. Both are regarded Extinct in the Wild.
[…]Extinct in the Wild/no records since 2008: „This species had long been thought to be endemic to the Teuchitlán Springs in the upper Ameca River basin and was already believed extinct in the wild when it was first formally described as a species in 1978 (Kingston, 1978; Miller et al., 1989). Fortunately, captive populations exist in North America and Europe, although many of these are inbred (Domínguez-Domínguez et al., 2005). In 2007, Omar Domínguez-Domínguez discovered a new population of Skiffia that suggested that S. francesae might still persist in wild. These fish were found at the El Molino spring pond near the town of Cuyucapán in the endorheic Lake Sayula basin, which is located ca. 80 km south of the Teuchitlán Springs.
Unfortunately, the El Molino population was eliminated when the pond dried completed during a drought in 2010. Thus, both types are extinct in the wild. Moderate numbers of captive populations of Skifia exist in Mexico, the United States, and Europe