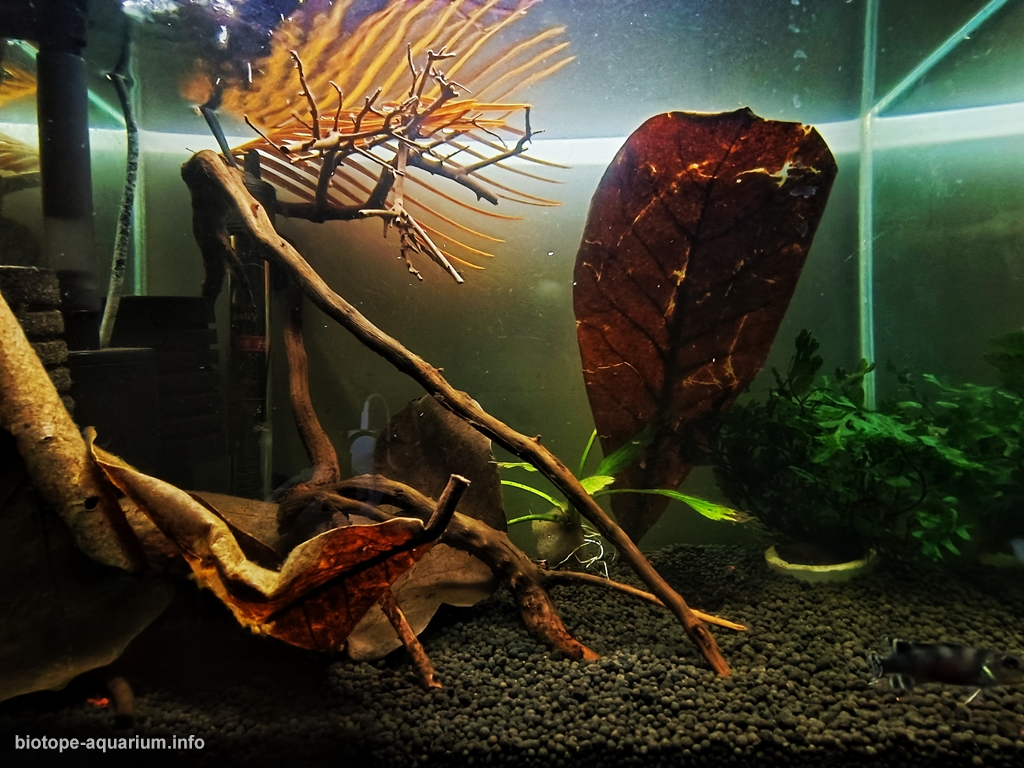 Description of the Area Surrounding the Biotope: Ganges River is Ganga in Hindi. Sanskrit Tiancheng script: ग ङ्ा, Latin phonetic note: GA ṅ G ā， English: Ganges, which means “from heaven”. It is a big river in northern India and has been the holy river of Hindus since ancient times. Most of its flow is a wide, slow flow through one of the most fertile and densely populated areas in the world. Despite its important position, its 2510km length makes it shorter by both world and Asian standards. Ganges River originates from gangoteli (actually tapovan grassland, the reason for the difference is that India’s theory of Ganges River source is mainly based on religious considerations rather than geography), with a total length of 2700km and a drainage area of 1.06 million km2 (excluding the tributary Jamuna River and its above); The average annual flow at the estuary is 25100 M ³/ s； It is 2071km long in India, with a drainage area of 950000 km2 and an annual average flow of 12500 M ³/ s。 The Ganges River originates from the Himalayas and flows into the bay of Bengal. Its drainage area accounts for 1 / 4 of India’s territory and feeds a highly dense population. The Ganges River flows through the Ganges plain, which is the center of Hindustan region and the cradle of a series of civilizations from the kingdom of Ashoka in the 3rd century BC to the Mughal Empire established in the 16th century. Most of the Ganges flows through Indian territory, but its huge Ganges delta in Bangladesh is mainly located in Bangladesh. The total flow direction of Ganges River is from north to northwest to Southeast. In the Delta, the flow is generally southward.

Ancient India is one of the four ancient civilizations, which once created a famous civilization in human history
After the confluence of alleghenanda River and pajiletti River in devaprayag, they form the mainstream of Ganges River, cut through the outer (South) Himalayas and gush out of the mountains in Rishikesh. Then in another Hindu holy land, herdeval flows to the plain.

Although the river water volume varies with seasons, it increases significantly when it receives more tributaries and enters areas with large rainfall. From April to June, the melting snow of the Himalayas flows into the Ganges River. The rainy season from July to September, the rainy monsoon causes floods. In Uttar Pradesh, India, the main tributaries on the right bank are the Yamuna River flowing through the Indian capital Delhi, which flows into the Ganges near Allahabad, and the tons river flowing north from Vindhya and soon into the Ganges in Madhya Pradesh. The main left bank tributaries of Uttar Pradesh are ramgunga River, Gomati River and ghaghaghara river.

The Ganges River then flows into Bihar state. The main tributaries from the Himalayas in the North include gendege River, burhi gandak River, ghugri River and Kosi River, and the most important tributary in the south is Song River. The Ganges then flows southward along the edge of the rajmehar hills, and then runs southeast to farakka, the apex of the delta. In West Bengal, the last Indian state into which the Ganges flows, the Mahananda river flows from the north. (throughout India, West Bengal and Bangladesh, the Ganges is locally known as the Bodo River). The westernmost branch of the delta is the Hooghly River, and Calcutta is located on its east bank. In Bangladesh, the vast brahmapudra River (the reach about 241km before confluence is called Yamuna River) flows into the Ganges River near guarndocard. The combined river is called the Bodo River, which joins the mecna River above Chandpur. The river then flows into the bay of Bengal through numerous waterways, the largest of which is the mecna triangle.

The sediment from the Ganges and Brahm

The Ganges River originates from the southern Himalayas on the Indian side of the Sino Indian Tibetan border. Its five origins – Bhagirathi River, Alaknanda River, Mandakini River, dhauliganga River and Pindar river all originate from the mountains in northern Uttar Pradesh. The two main sources are alleghenanda River (the longer of the two rivers) and pajiletti river. The former originates from 48km north of NANDA Devi in the Himalayas, and the latter originates from the ice cave at the foot of Gangotri glacier in the Himalayas, with an altitude of about 3050m. Gengodry itself is a pilgrimage shrine for Hindus. However, Gaumukh (79 ° 5 ′ 0.345 ″ E and 30 ° 55 ′ 35.31 ″ n), about 21 km southeast of gengodry, is considered to be the real source of the Ganges River.

The headwaters to Allahabad are the upper reaches. The two major headwaters of Ganges River are alleghenanda River and pajiletti river. The upper reaches of the two rivers gallop between the Himalayas, the terrain drops sharply from 3150m to 300m, and the rapids are turbulent. The two rivers are called Ganges after they meet near devobulayag. When the Ganges flows to Allahabad, the altitude has dropped to 120m. The upper reaches of the river are bounded by herdeval, and the upper reaches pass through the siwalik mountains. The riverbed is mostly rocky, the river channel is narrow, and there are many rapids; The following reaches enter the plain, the river surface widens to 0.76 ~ 3.3km, sediment deposition, swamps and low-lying areas on both sides of the river, and the river is often diverted in rainy season. In dry season, the flow is 200m ³/ Second; In rainy season, the flow reaches 5680m ³/ Seconds.

The middle reaches are from Allahabad to West Bengal. The Ganges River receives the largest tributary Yamuna River. The water volume increases greatly, the river surface becomes wider, the shape is curved and the terrain is flat. In dry season, the river is about 1km wide; In rainy season, the river width is 5 ~ 6km. Then it flow
As there is almost no difference in the whole surface topography of the Ganges plain, the velocity of the Ganges River is slow. Between the Yamuna River in Delhi and the bay of Bengal, the distance is nearly 1609km, and the drop is only about 213M. Ganges Brahmaputra plain covers a total area of 777000 km2. The plain alluvium is more than 1829m thick in some places, but the alluvium age may not exceed 10000 years.
After the Ganges River passes through the siwali mountains, it enters the plain near the ancient city of hadwa, and goes side by side with its famous tributary Jumna River. When it flows to arahabad, it meets together, and the terrain drops to 120m. As the Ganges River is now Sandy and muddy, and the Jumna River is deep and clear, the brown Ganges River and the blue Jumna River form a very obvious water line, which will gradually blend and mix later. The Ganges then flows majestically to Varanasi, the religious holy land of India, and contains many tributaries (such as gogra River, Song River, gandak River, gugli River, etc.). The river is wide and the water flows downstream.

After entering Bangladesh, Heng is called Padma (meaning Lotus) River, which is divided into several tributaries and converges with the great ramaputra River to form an “Ya” shape, and finally flows into the bay of Bengal. It is here that the Ganges Delta, the largest Delta in the world.

Description of the Underwater Landscape of the Biotope: The river I described is located in the middle and lower reaches of India, almost in a state of barren grass, because it has been completely polluted by the original residents near the riverbank basin of India. The river is full of dirty floating debris, long soaked corpses, waste from all kinds of heavy industrial pollution and residents’ excreta, but it is in this case, There are many kinds of fish in the river, and they are big and fat. There are very adaptable fish in the river, such as catfish and black fish. The food source is all kinds of waste and the bodies of all kinds of animals and humans. The bottom bed of the Ganges River is accumulated by dirty and smelly sludge. There are no plants and only some unknown aquatic plants. I would like to take this article to launch the purpose of protecting the environment, because the original landscaping competition should not only focus on the beautiful original environment, but also pay more attention to the damaged ecological rivers and environment. This is a complete competition, not a one-sided competition.

Description of the Habitat Parameters: There is a huge difference in water parameters in each basin of the Ganges River in India. This time, I chose the most polluted river basin, with GH over 12, pH around 8 and TDS1000 + The color of the watershed is turbid black, very dirty.

List of Fishes and Invertebrates Occurring in the Nature Biotope: Pelodiscus sinensis

List of Plants Found in the Nature Biotope: no

Threats to the Ecology of the Biotope: I am very sad. I am 24 years old. I am a famous environmentalist and practitioner in China. I like the Ganges River in India very much. I think this river is very great and majestic, which can be called a miracle, but the ecological environment and ecosystem of this river have been seriously damaged and endangered by mankind. Every time I visit the site and look at the devastated Ganges River, my heart is bleeding. In fact, my work does not restore the Ganges, but I just hope to let the judges see my message. It is not that human beings imitate the beautiful natural aquatic environment on earth that is the purpose and profitable project of our competition. I think we should set an award for environmental protection independently, so that our competition can be complete and can be regarded as the real original intention and true love. The Ganges River in India has been destroyed by the original residents of India. On the one hand, they deceive themselves that it is their great holy river. On the other hand, they have extremely damaged the ecology of the Ganges River. Now the turtles, catfish and snakehead in the Ganges River have mutated and began to eat human corpses. There are no water plants and plants in it, and a super phage has been produced, The original residents recklessly pour garbage and corpses into the Ganges River and various chemical wastes to pollute the river, so I want to take this opportunity to protest and call on our native world competition to pay attention to the pollution of all rivers. It is very difficult for me to participate in the competition this time. I sincerely hope that the judges will focus on my suggestions. I am just a small person. Your strength is much stronger than me. Thank you very much for reading my ideas. All the people of Inner Mongolia wish you a happy new year. 1.31 is the biggest festival in China, the Spring Festival.