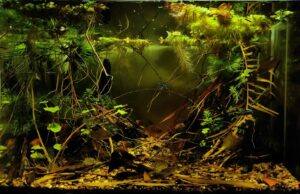 Description of Decorations and Substrate: Wood, leaves and plants which are suitable for the region were used. The bottom contains sediment and filamentous algae, as you will see in the nature biotope. In the same way dirty on the branches. This aquarium mimics the coastal area of ​​the river.

Description of the Area Surrounding the Biotope: The Paragua River is a river of Venezuela. It is part of the Orinoco River basin. It is the largest tributary of the Caroní River. The Caroní River is the second most important river of Venezuela, the second in flow, and one of the longest, 952 kilometres (592 mi) from the Tepui Kukenan, where it originates with the same name Kukenan, up to its confluence with the River Orinoco to which it belongs. The name “Caroni” is applied starting from the confluence of the Kukenan with the Yuruani, at 182 kilometres (113 mi) from the source of the Kukenan and 770 kilometres (480 mi) from its discharge in the Orinoco. The meeting takes place in the south of Venezuela, in Bolivar State, being the most important tributary of the Orinoco, mostly because of the high discharge rate. The higher basin of the Caroni is situated in the Gran Sabana (Canaima National Park) close to the border with Brazil. The river drains the Guayanan Highlands moist forests ecoregion.[2] The Caroni basin covers 95,000 square kilometres (37,000 sq mi) and is part of the Orinoco basin, the most important river of Venezuela. This means for the two big rivers that they have very similar hydrographic characteristics. The Caroni itself and its tributary the Paragua are rivers with a staircase, in the sense that many falls and rapids are alternated with stretches with gentle slopes, with many meanders and oxbow lakes (naturally cut off meanders). Among the most important falls of these rivers and their tributaries may be mentioned the Angel Falls, with the highest free fall of the world, almost 1,000 metres (3,300 ft), and the Kukenan Falls, the tenth on the world scale with a 610-metre (2,000 ft) free fall. Others are falls with less height but with a high volume of water, like the Aponwao Falls and the Caruay Falls, and rivers with these names: the Toron River, the Eutobarima River, the falls of the La Llovizna and the Cachamay River, these last three in the Caroni itself and the last just before its discharge into the Orinoco.this area is converted annually into an inland lake by flooding. The climate of the river basin is tropical, with the seasons marked by differences in rainfall rather than in temperature. The year is divided into two seasons—rainy and dry (locally known as winter and summer)—the former extending from April to October or November and the latter most marked from November through March or April. The wet and dry seasons result from the annual migration of the intertropical convergence zone, a low-pressure trough between the hemispheric easterlies, or trade winds; the passage of the zone northward from its summertime position south of the Equator brings the rainy winter period. In contrast to precipitation, temperature differences in the basin are slight throughout the year; and no month averages more than 69 °F (21 °C) or less than 64 °F (18 °C). Whatever the average temperature, there is little difference from month to month. The only marked variation is from day to night, being greater than that from month to month. Daily maximum temperatures rise above 95 °F (35 °C) in the dry period; the dry winds and nocturnal cooling bring relief with normal minimum temperatures between 65 and 75 °F (18 and 24 °C). More than 1,000 species of birds frequent the Orinoco region; among the more spectacular are the scarlet ibis, the bellbird, the umbrella bird, and numerous parrots. The great variety of fish include the carnivorous piranha, the electric eel, and the laulao, a catfish that often attains a weight of more than 200 pounds. The Orinoco crocodile is one of the longest of its kind in the world, reaching a length of more than 20 feet. Among other inhabitants of the rivers are caimans (an alligator-like reptile) and snakes, including the boa constrictor. The arrau, or side-necked turtle, the shell of which grows to a length of about 30 inches, nests on the sandy islands of the river. Insects include butterflies, beetles, ants, and mound-building termites.

Description of the Underwater Landscape of the Biotope: There is no large rock in the river basin and the benthic sediments are mostly composed of thin white silica sand, mixed with plant litter. In spots where the moriche palm trees are spaced out and a lot of sunshine hits the water, large amounts of freshwater plants colonize the sand. It is common to find large patches of short green grasses which seem like underwater lawns. In deeper areas, diverse types of plants create an underwater jungle and in some places filament algae grow in excessive amounts, below the crystal clear water.

Threats to the Ecology of the Biotope: Abundant water in the Orinoco River Basin supports the needs of people, agriculture, energy and industry (oil and gas) that are vital for Colombia’s social and economic development. But the basin faces increasing pressures from the expansion of mining (942 concessions for 2014), oil and gas (8 million ha under exploration), agro-industry (320,829 ha), and infrastructure, which if not adequately planned and implemented can disrupt the hydrology and ecosystem services of the region. Additionally, the Orinoco Basin’s seasonal rainfall patterns will potentially face further extremes and unpredictability from climate change, leading to greater droughts, flooding, and fires. Maintaining the health of the Orinoco River Basin is vital to support adequate water and services critical for people, the economy, and nature.